Sound design for the Paris-based animation agency Amuse on their acclaimed YouTube show, part of a series called Car City.

These are a few episodes featuring my sound design.

Founded in 2015, Amuse is dedicated to producing and distributing kids’ content across digital platforms.

Located in the heart of Paris, our team of artists & animators, writers, developers and executives collaborate everyday to produce & distribute great shows throughout the world.

HR contacted me through SoundLister, explaining the type of job and the fact it would be fully remote. They also sent a 36-seconds long test to be completed for the following week — which I did, successfully.

Straightforward process: sign up for an account on their own online production management platform called Scale3, join their Slack, read a single induction document explaining the procedure from start to delivery, along with a set of specifications and how to file an invoice.

The company adopts agile processes based on Scale3, to ensure a steady production schedule.

The job started before the pandemic and continued during the first lockdowns in Europe. I interacted with the project manager using Slack. All the episodes of Car City in production were listed in the system, along with features such as state of completion, deadlines and the required documentation.

I had access to a cloud storage, where a certain amount of audio libraries created by Amuse were available to download and use. These included all the characters voices, reusable sounds and many car-related effects. While I was bound to use their characters libraries, they let me choose whether to adopt their other SFX folders or not. I ended up using a mix of theirs and mine.

I chose to book tasks based on the type of story and the fun I thought I would get from their complexity. On Scale3 all the working materials were downloadable from each episode’s page: the pre-recorded voice-over in .wav format, the screenplay and a description of the general requirements.

Once I familiarized with the screenplay and the silent video animation, my go-to actions were:

Then it was a matter of following the story and create the sound design for the rest of the movie. Sometimes I kept an iPad in sidecar mode, so to have the video on its own.

I didn’t particularly use plug-ins except for reverb with impulse responses, though I did rely a lot on Logic functionalities such as item gain, pan, and a whole lot of automation. 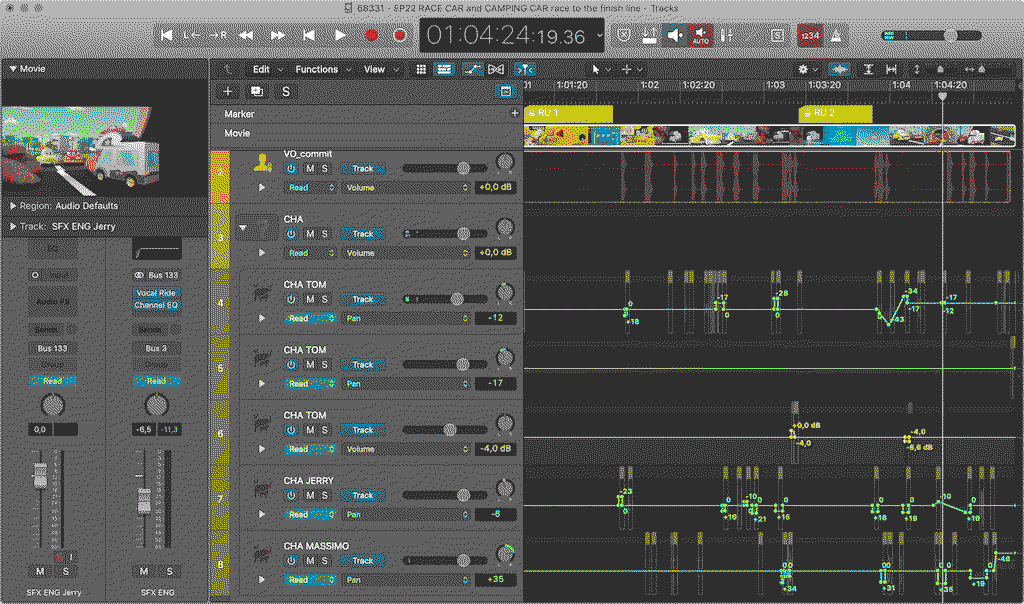 Once the mix was finalized and uploaded to Scale3, the project manager would listen to it and upload their feedback. I would receive a message on Slack, along with the possibility of having a discussion or asking for further explanations.

Once all the edits requested in the feedback were completed and a sign-off was obtained, I would proceed to master the audio and export the video following the guidelines. The task would be marked as complete, usually in less than an hour.

Payments would be sent each month on the same day following the upload of an invoice on Scale3, outlining all the signed-off tasks within that timeframe.

The release of episodes on YouTube had a schedule that was outside my scope, but were never too far away: usually a couple of weeks after my delivery.