As the audio team leader for the Playstation2 game Ruff Trigger, I directed the soundtrack as well as created the sound effects.

How I became a game audio team leader

In January 2000 a company called Playstos Entertainment offered me a job as a web developer, right when I was at the final interview stage with a famous Italian internet provider. A web designer himself, one of Playstos’ co-founders was looking for someone who understood both aspects, creative and technical. I liked the guy immediately, as well as the rest of what I saw: in a room full of 3D animators, someone worked on a Yamaha Klavinova piano — didn’t know why, didn’t ask. Even the CEO sit among those people, crafting 3D on a regular Dell computer.

I started at the end of January 2000 and stayed with Playstos for 5 years. At the time it comprised twenty people, growing until it doubled in size.

My work as a web developer hit a roadblock when the co-founder suddenly left the company a week later, for reasons that eluded me. A replacement didn’t arrive, therefore all the web work (creative and technical) was offloaded on me. I was managing quite well, when I was informed that the company was secretly developing a videogame codenamed Hot Dogs, which would become Ruff Trigger: The Vanocore Conspiracy.

Since Playstos initially didn’t have a plan about audio, as soon as they found out about my skills as a musician and sound designer my role quietly morphed. Within a few months I turned a decent-sized storage room into a full-fledged studio, so that the sound for Ruff Trigger would be handled in-house.

I used Mac and Windows at the same time: a Dell and a G4 in sync. Each computer had the same Creamware soundcard connected to the 01W mixer through an AES/EBU sync box. MIDI MTC did the rest.

Whenever I wanted to offload CPU from Logic, I tended to run Vegas Pro or Cubase VST on the Dell as a secondary sequencer. The mixdown happened on a Sony DAT deck, before the final master.

My work on Ruff Trigger

I initially worked with a colleague, a musician and 3D artist. Before he got permanently moved to the 3D department, we managed to record and mix several brilliant pieces who went unused in the final game, mostly because the game levels iterated frequently and the music wasn’t right anymore.

Working closely with the audio programmer, I implemented an adaptive soundtrack within the in-house game engine MXE®. What we did was deploying stems divided in overlaying chunks. Similarly to what can be achieved today with audio middleware, the layers could be triggered by specific parameters based on different situations in the gameplay, thus helping increase or decrease the tension.

Warning — The following songs are demos rendered in their linear versions. They don’t reflect their original behavior in the gameplay, where each song had distinct instrument layers that were activated or deactivated following cues from the game engine. As they’re the original demos, they aren’t properly mixed nor mastered.

Divided in two distinct sections, it reflected the completely different situations happening during a day/night cycle.

One of six atmospheric pieces triggered by remote parts of a specific game level. The wind was created with the Korg Trinity.

I had fun with the bass! As this level had a fixed time, the duration reflects how long was needed to complete the mission.

Originally written by my colleague Giuseppe Bianchi, it was set in a Mexican-like environment that was axed early on.

More fun bass parts to play with! Made of many interchangeable music layers, I don't know if the level was included in the release.

Run For Your Life

In a labyrinthine area where the boss, unseen, was approaching the player, the piece served as anticipation of something evil.

Although my initial focus was creating and implementing the sound effects, many minutes of music were written between 2001 and 2003. When I realized I wasn’t able to dedicate enough time to the soundtrack I asked to hire a new professional. When a guy who used to work for Sony in Liverpool arrived, I was made team leader: along with project management, I re-centered my efforts.

Despite having several libraries at my disposal, I wanted to create the effects myself, hence a request to equip the studio with a few mics. Around the end of 2001, a demo was scheduled to be shown in London, in order to obtain a license to develop for the Playstation2. Most of the sound commentary was made using a combination of Foley in the studio and field recording for both realtime and video cues.

The editing and the final authoring were made with Sound Forge, Vegas Pro and Logic Audio Platinum.

After obtaining a license to develop the game for Playstation2, we worked to get Ruff Trigger to the Xbox as well. Numerous SDKs arrived from Microsoft, including a transparent one for the audio team. I learned their middleware XACT along with audio optimization and version control using Alienbrain.

The dev team in Playstos had done a great job integrating all the required Xbox libraries and dependencies, so that we could work with XACT using calls from the game engine to trigger both sound effects and the adaptive soundtrack.

We managed and implemented audio for two different major console platforms, using different tools, assets and specifics. Until 2003, when the Xbox was dropped.

In January 2002 the CEO informed me that I’d be one of twelve colleagues who would attend the Game Developer Conference in San Jose (California), 19th to 23rd of March, though we ended up staying for more than a week. The motto for that edition was Make Better Games.

Around ten thousand people took part that year. A formative experience, it pushed me out of my comfort zone like anything has ever done before. I met with strangers from all over the world, exchanged views and contacts, took an astounding amount of notes.

Audio conferences started a day later, on the 20th, so I wandered around the suburbs alone for hours. I ended up buying the iPod first edition at a massive San Antonio Shopping Center. Ironically, I met a sound designer there with whom I chatted for a while.

My first day was entirely filled with the 8-hours workshop Using DirectMusic for Music and Sound FX, with Brian Schmidt and Scott Selfon among others. Amazing insights about XACT and how to optimize the audio delivery on an Xbox.

Beyond the first unveiling of Steam by Valve on the 22nd, I took part in the historical event for the game audio industry the day before: the foundation of the Game Audio Network Guild, with Tommy Tallarico, Brian Schmidt, Thomas Dolby and many others. I still have my bronze member certification. The end of that same day was highlighted by Using a Live Orchestra in Game Soundtracks with Michael Giacchino and others.

The culmination was the keynote given by Martin O’Donnell, audio director for Bungie on Saturday the 23rd. I experienced The Audio Production for Halo in a room absolutely packed. Besides the technical aspects of him showing production screenshots and actual tricks, along with praises to Microsoft for letting him work on a Mac, I remember filling half a journal with notes about how sound can empower a non-linear story.

Back in Milan, something changed. I was optimistic and excited about the vast amount of knowledge and inspiration gained at the GDC. However, after a week of silence, I asked for a meeting to exchange feedback and insights. Alas, none of what I learned in California got implemented at Playstos, which left me disappointed.

During my stint at Playstos I happened to manage the work of five people. The best time was between 2002 and 2003 — two sound engineers and an audio programmer working together in the same studio. I attended plenty of meetings where I voiced our concerns and suggestions, co-ordinating with the producer while meeting the agreed schedule.

Politics and lack of a major publisher

In 2003 the company internal dynamics changed. Despite being built three years earlier around a concept of friendship, growing difficulties started to strain internal dynamics. The lack of interest shown by high-level publishers eroded confidence while the first layoffs soured the relationships between colleagues.

To appeal to smaller publishers, the game had to change. New hirings with higher levels of experience in the industry arrived and were given full discretionary powers. A few of us who were there since the beginning didn’t take it too lightly and left.

‘Whatever the cost’ and burnout

Some of the new leaders criticized the game, judging it as puerile. What was Ruff Trigger as I knew it changed rapidly. Striving to be constructive, I supported a few decisions whilst debating others, and for that I was asked to stop creating problems. At the end of 2003 it looked like the sole goal was to cut corners and let the game out whatever the cost.

I asked to step down as team leader and renegotiated a new contract at the beginning of 2004, when I started working from home. Now paid per seconds of delivered music, the sound effects were internally handled by my colleague from Liverpool. A special VPN connection allowed me to use the internal assets and go to the studios once a month to check on the progress. Despite the renewed situation and being away from the office politics, I discovered how burned out I was.

Over the years I spent many nights at Playstos, working double and triple shifts: the impending feeling of “it was for nothing” was weighing me down. In the meantime, Ruff Trigger kept turning into an unexciting budget game.

At the end of that year, I left.

Once Playstos found a publisher (Natsume), the game completed its transition from a multi-platform ambitious project to something else. The audio was offloaded to a third party, therefore most of my contributions were relegated in the credits as “prototype sound designer”. 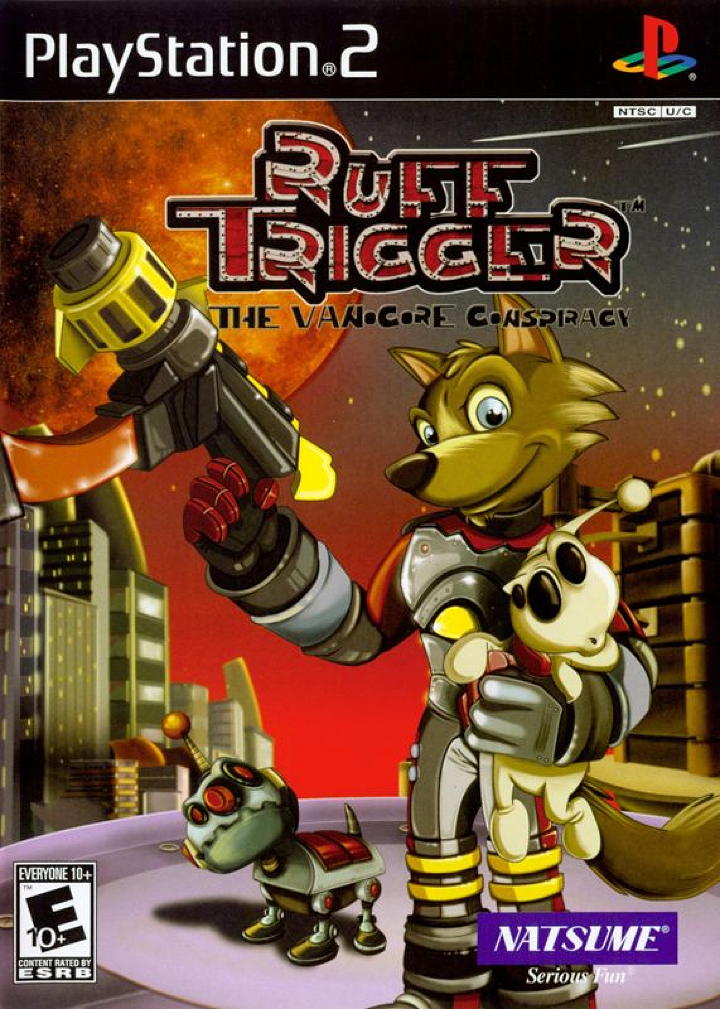 Most of the less favorable feedback is focused on a couple of factors: the excessive similarity with Ratchet and Clank and a general lackluster gameplay. The game was always going to resemble the title as an homage to the genre, however Playstos chose to sacrifice the initial ambition to limit the economic loss of a 7-year massive project.

Why didn’t I join another game company

Even though I kept working with audio, I turned my interest to web design. What started as time off the game industry turned into a different kind of career.

In 2017 I wrote an autobiographical concept album where a few songs were made of unused music from the Playstos years. Initially conceived as a theatrical piece, it rekindled my passion for audio-visual narration prompting me to go back to game audio.

While I updated my skills by studying Wwise, FMOD and their relation with major game engines, I got to work as a sound designer for Paris-based Amuse Animations.

When passion goes beyond working duties… here’s Simone. Addiction and reliability are two great details you can’t easily find nowadays in a professional and he gets both. — Jean Claude Nouchy, Houdini FX technical director and trainer

Simone is a very talented web designer and audio composer. He pays a lot of attention to quality and detail, and he’s always willing to improve his wide array of skills. Definitely a pleasure to work with. — Michele Sandroni, Technical Artist at Bosch Rexroth AG

NEXT →
Mixing Premonition and ruin